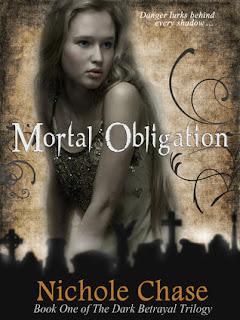 Goodreads:
Ree will face the darkest form of betrayal before the year is out. Seventeen year old Ree McKenna has three goals: get through high school, convince her crush she is more than his best friend’s little sister, and save money for college. Fate, though, has other plans for her. After the untimely death of her older brother, Ree is haunted by dreadful nightmares and terrifying visions. To make matters worse, Ree has started to suspect that something dangerous is stalking her from the shadows. A night full of frightening surprises leaves Ree with unsettling news. Gifted by the gods with unusual powers, she must devote herself to a battle that could very well lead to not only her death, but the demise of everyone she knows and loves. After all, Ree is the only mortal standing between the Earth and utter darkness. Set in Savannah, Ga, Mortal Obligation is the first book of The Dark Betrayal Trilogy.

My thoughts:
The story started out with someone watching her but she didn’t know who. I kept reading because of it. I really wanted to find out what was stocking her, plus there was a cute guy at her table that was taking her to a concert (had to see that play out…he he.) By the second chapter that was a major reveal, and I was hooked. The middle was a bit slow, with the tension coming mainly from the love triangle. But the ending was fantastic and left me needing the next book. The love triangle was fun as well, and I have to say that I’ve gone and fallen for both of them.  (P.S. I have read the next book in this series and I have to say that so far it is my favorite! So keep reading!)
Note: I’d rate this PG-13. There are some bloody scenes but not many and there is some swearing. I give this book four stars.
Posted by Unknown at 9:47 PM