I'm very excited to be apart of the cover reveal of Fallen from Grace by K Anne Raines! This sounds like a great YA Paranormal Novel. And the cover is so pretty. Enjoy! 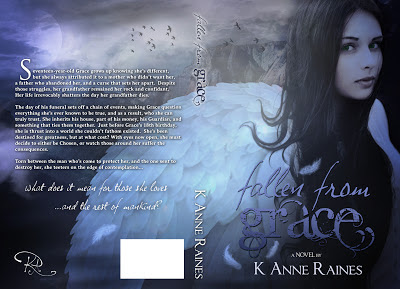 Seventeen year-old Grace grows up knowing she’s different, but she always attributed it to a mother who didn’t want her, a father who abandoned her, and a curse that sets her apart. Despite those struggles, her grandfather remained her rock and confidant. Her life irrevocably shatters the day her grandfather dies.

The day of his funeral sets off a chain of events, making Grace question everything she’s ever known to be true, and as a result, who she can truly trust. She inherits his house, part of his money, his Guardian and something that ties them together.

Just before Grace’s 18th birthday, she is thrust into a world she couldn’t fathom existed and does everything she can to thwart the destiny suddenly forced upon her. She’s been chosen for greatness, but at what cost? With eyes now open, she must choose to either be Chosen, or watch those around her suffer the consequences.

Torn between the man who’s come to protect her and the one sent to destroy her, she teeters on the edge of decision, trying to come to grips with who she is, what she wants and what all of that means for her, those she loves and the rest of mankind.

Want to connect with K Anne Raines? Here are her links.
http://www.facebook.com/raineskanne
http://www.twitter.com/kanneraines
http://www.kanneraines.com (still under construction, but will be up soon)
http://www.goodreads.com/author/show/6580110.K_Anne_Raines

Posted by Unknown at 1:00 AM No comments:

I'm so excited! I just got this email:

Congratulations. Your novel Curse of the Beast has received at least the minimum five reader nominations needed to be considered an official nominee for the 2012 Whitney Awards, a literary award honoring excellence in fiction by LDS authors. Congratulations on your nominations!


Thanks to everyone who nominated my book. I'm so thrilled to be in the running!
Posted by Unknown at 1:17 PM 14 comments: