Here is another glimpse into Enslavement by Ashley Lavering. Grab your copy here for a $0.99 pre-sale special! Coming to your kindle Dec 21, 2015:

A clang of metal was only a distant sound as someone wrapped their arms around her. “Breathe!” Bear’s voice commanded.

Azika gulped the thick air as if she was suffocating.

Hands pried her fingers from the ragged stone wall she was gripping. She fought them but it was useless. The next thing she knew she was being carried back to cleaner air. The cool air was a soothing relief from the sulfur stench, but she longed for the fresh air of outside.

She looked up into Bear’s face, his eyes were soft with concern. Forgetting herself, she buried her face into his tunic and cried. Guric’s revenge was more than she could handle. She wasn’t going to make it down here.

She wasn’t sure how long she cried but when the tears finally stopped, embarrassment and unease replaced them. Bear hadn’t said a word and she was scared to look into his eyes, afraid of seeing them distant and cold.

She moved out of his embrace, but he held her fast. Azika dared a peek at Bear and shied away from his intense gaze. Sinking as far away as his arms would allow, she lowered her gaze to the cave floor.

Her small voice filled the air between them. “Sorry. I didn’t mean—I’m sorry. You didn’t have to help me.”

His grip on her loosened and she backed out of his arms. “What was that back there?”

Her hands rubbed her arms as if that would warm her. She didn’t look at him when she spoke. “I don’t like tight spaces.”

He barked with laughter. Azika jumped and her gaze flew to his face.

“You have got to be joking! How have you survived this camp being claustrophobic?”

Tight lipped, she pushed to her feet. “You wouldn’t understand.” She wasn’t about to explain to him how Guric had kept her from the mine as a child and how many times since entering the mine she was whipped by the guards for having an episode. Rene usually helped calm her down before it got too bad, but sometimes even she couldn’t help. People just weren’t meant to be underground.

“Azika, does this happen every time you go on shift?”

“No.” Azika paused, unsure if she wanted to say more, but then Bear’s eyebrow arched and she continued, “I’ve learned to deal with it.”

“Not very well from what just happened,” Bear said matter-of-factly.

Her energy seemed to leech from her and she sat down. “I try, but dirt was falling from the ceiling.” She pointed up to emphasize her point. “A whole crew died from a cave-in.”

She must embrace what scares her to escape enslavement. 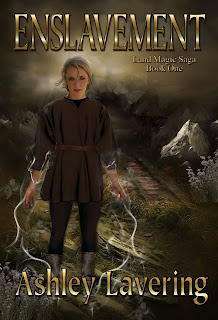 Enslavement Excerpt:
The full moon’s silver rays seeped through the narrow slits of the barred window that sat high in the barrack’s stone walls. With a dirt encrusted fingernail, sixteen-year-old Azika traced the slim rods of light falling on her arm like shadowy prison bars, devoid of warmth. It mirrored the cold, hollow grief gripping her gut as she tried to push the nightmare from her mind, but the haunting screams of the dying and smell of burning flesh repeated in her mind until her stomach rolled.
Despair clung to her like a filthy coat, sending a shiver down her spine. The rusty bunk squeaked under her shifting weight. She pulled her musky wool blanket up to her chin for warmth, but not all the trembles were from the chilly predawn air. The dream was always there, waiting every time she closed her eyes, but this time it felt so real. The images dancing behind her eyelids were as vivid as the reality around her. The noise, the blood, the loved ones lost...
Azika shook her head, desperate to knock the dream from her mind before tears found a way through her shield.
Back Blurb:
Sixteen-year-old Azika is a slave in the Kongul Mining Camp for as long as she can remember. Cursed with beauty, she is forced to hide under dirt and filth to keep the guards at bay, but there is one who knows what lies beneath the grim and will stop at nothing to have her. Struggling to hold tight to her courage, Azika finds herself sentenced to the dangerous exploration tunnels.

Befriending a fellow crew member, who remembers life outside this prison, Azika dares to believe they can escape and finally unravel the mysteries surrounding her life. Even with Bear’s help, the odds are stacked against them. For how does one escape a mountain and the guards surrounding it?
Posted by Unknown at 10:33 AM 1 comment:

I am so excited to announce that Enslavement: Land Magic Saga Book 1 will be on pre-order soon and is releasing on Dec 21, 2015! I know it has been a long wait, but it is finally ready.

Sixteen-year-old Azika is a slave in the Kongul Mining Camp for as long as she can remember. Cursed with beauty, she is forced to hide under dirt and filth to keep the guards at bay, but there is one who knows what lies beneath the grim and will stop at nothing to have her. Struggling to hold tight to her courage, Azika finds herself sentenced to the dangerous exploration tunnels.


Befriending a fellow crew member, who remembers life outside this prison, Azika dares to believe they can escape and finally unravel the mysteries surrounding her life. Even with Bear’s help, the odds are stacked against them. For how does one escape a mountain and the guards surrounding it?


And now for the cover reveal! Thank you Katt for another wonderful cover! 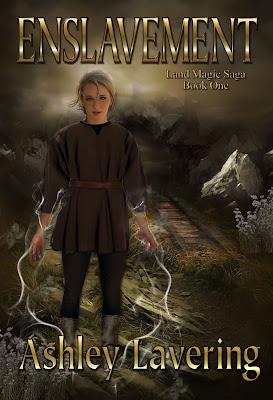 CASPER Friends-- I wanted to let you know that I will be doing two author events and would love to see you there!

Very excited about these two events! Hope to see you there!

Here is a much needed update!

I am in the editing stages with Star Cursed Audible and will have it ready for summer!

My editor has Enslavement: First book in the Land Magic Saga  (YA Fantasy) and will have it done at the end of May. Yay. June will be editing month for me for sure! My cover designer has already started on the cover. Eeep! Design by Katt you are amazing!

My last day working of my wonderful Charter school as their teacher's aide/PE instructor will be June 12. After that I will be a stay at home mom and writer with my new little baby coming the end of August!

I also have ambitions to get an author website up and running to give you all more information on my projects and events happening.

Thanks for being my Fans!

You are all amazing and patient with me as I get my writing career back in order:-)