My friend, M.R. Polish is having a fun writing contest and give away. So I decided last night to write something for it. Here it is! Have a Happy Halloween!

Posted by Unknown at 2:14 PM No comments:

The Worth of Stories

I am always so inspired by DavidFarland’s writing advice (Daily Kick in the Pants).  He not only spends time talking about the mechanics of writing but the emotional, business, and worth of writing.

I know I loved to write. I know that I would wilt away if it was taken away from me, but I’ve had a hard time justifying the time I spent on something that felt recreational. In the grand scheme of life is my writing going to do any good in the world? It is fictional and filled with mythical creatures and people that don’t even exist. Yet, it makes me happy, so I keep writing, but I want it to mean something.
I have been learning slowly that it is okay so spend time on writing. That, writing is not only healthy for me, but that I could entertain someone else with a ‘good’ story.  I put the “good” in quotations, because that word means so many different things to different people. For me it means that the content in my “good” story wouldn’t embarrass or shame me if my children, parents, or grandparents read it.
But the peace that I have been laboriously trying to come to terms with finally solidified when I read David Farland’s Daily Kick in the Pants—What Stories Can Do.  In his clear and well written email post, he was able to help me understand the underlining worth of storytelling.
He talked of how humans need to talk and when we aren’t talking we are listening, but we need that interaction. We are social creatures. He also brought up that some people might argue that writing a story for entertainment only is a waste of time, but he showed examples how people need to be simply entertained at times. There was a touching story of a man in so much pain from a medical condition that reading one of David’s books was the only thing that could take his mind off of the pain, because it transported him so fully into a different world.
For other’s the story speaks to them in a way that helps them deal with life, as if giving them strength or hope on an otherwise dismal day.
There are so many ways that storytellers can reach out to others. They can educate, entertain, or simply have a story that resonates with someone. For me, when I was a kid, I loved Blue Heron by Avi. It really spoke to me as a child. As an adult, I re-read it and didn’t find it as enjoyable as I did when I was young. I realized that when I was younger and my family was torn apart that I had something in common with the protagonist that made the story my life-line at that point in time.
Sorry, didn’t mean to get so personal, but I had to thank David Farland for this Daily Kick. I love to tell stories, and I hope that others will get something out of them or just simply let me transport them into a different world for a while. Writing stories add meaning to my life, and thanks to people like David, I now feel it in my heart that my efforts aren’t a waste of time.

Posted by Unknown at 4:25 PM No comments:

Email ThisBlogThis!Share to TwitterShare to FacebookShare to Pinterest
Labels: David Farland, worth, Writing 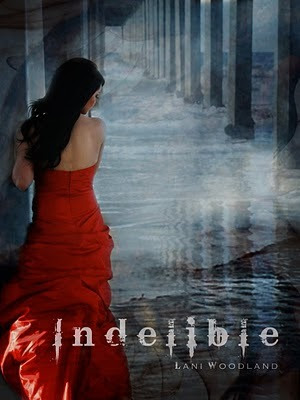 My thoughts:
Wow. If you love ghost stories with a mystery that could kill, then you will love Indelible. Plus, the romance is awesome.
Indelible is a stellar sequel to Intrinsical! It’s packed with mystery and near death experiences. Lol. No pun intended. I really enjoyed the twist and turns and the characters. Yara will blow you away in this book. It is fun to see her grow into her powers. I really liked her Grandma Vovo.  It was fun to finally get to really experience her character and fall in love with her personality. Brent, of course, is still a heart throb and oh so endearing. Chel doesn’t disappoint, either. Her corky personality and her mad researching skills were very entertaining.  There were many times I laughed out loud, during the book, and other times that I nearly cried—such a great story.
A big thumps up to Lani Woodland for an amazing story filled with tension and romance! Can’t wait to see what the third installment will bring!

Book description per Goodreads:
Sixteen-year-old Yara Silva has always known that ghosts walk alongside the living. Her grandma, like the other females in her family, is a Waker, someone who can see and communicate with ghosts. Yara grew up watching her grandmother taunted and scorned for this unusual ability and doesn t want that to be her future. She has been dreading the day when she too would see ghosts, and is relieved that the usually dominant Waker gene seems to have skipped her, letting her live a normal teenage life. However, all that changes for Yara on her first day at her elite boarding school when she discovers the gene was only lying dormant. She witnesses a dark mist attack Brent, a handsome fellow student, and rushes to his rescue. Her act of heroism draws the mist s attention, and the dark spirit begins stalking her. Yara finds herself entrenched in a sixty-year-old curse that haunts the school, threatening not only her life, but the lives of her closest friends as well. Yara soon realizes that the past she was trying to put behind her isn't going to go quietly.

In the Coils of the Snake by Clare B. Dunkle 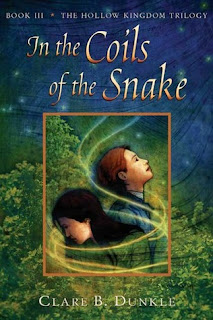 In the Coils of the Snake (The Hollow Kingdom Trilogy #3) by Clare B. Dunkle

Description as on Goodreads:

In the powerful final volume of the Hollow Kingdom trilogy, Miranda has waited her whole life to come home to the goblin kingdom, never imagining she'd feel so alone. Caught between two hostile races, she becomes their greatest reason for war--and only hope for a future.
My Thoughts:

The first book in this Trilogy was amazing! The second was good, but the third one was Wow! I couldn’t put this book down. At first, I was lost as to who Miranda was but that was soon cleared up. The story took so many turns that it was delightful to read. I really loved the characters. Dunkle’s ability to build characters that you fall right into and feel like they are real is amazing. In the Coils of the snake took me on an excited journey that I thoroughly enjoyed!

Visit her site by clicking here.

Posted by Unknown at 2:35 PM No comments:

Book Description per Goodreads:
Luce would die for Daniel.
And she has. Over and over again. Throughout time, Luce and Daniel have found each other, only to be painfully torn apart: Luce dead, Daniel left broken and alone. But perhaps it doesn’t need to be that way. . . .
Luce is certain that something—or someone—in a past life can help her in her present one. So she begins the most important journey of this lifetime . . . going back eternities to witness firsthand her romances with Daniel . . . and finally unlock the key to making their love last.
Cam and the legions of angels and Outcasts are desperate to catch Luce, but none are as frantic as Daniel. He chases Luce through their shared pasts, terrified of what might happen if she rewrites history.
Because their romance for the ages could go up in flames . . . forever.
Sweeping across centuries, PASSION is the third novel in the unforgettably epic FALLEN series.

To be honest, I thought this book was going to be laborious to read with all the past lives, but I was so unexpectedly pleased when I got sucked into the book! There were a few slow spots, but over all I loved it. It really did help the love story along and now I can’t wait for the last book!

My novel Curse of the Beast will be published spring 2012!!!  My paranormal romance, is a retelling of Beauty and the Beast with a unique werewolf twist! More teasers to come:-)

It was a hard choice to make whether or not to self publish, (I still had a huge list of agents and publishers), but as I did my research, I found that self-publishing was a great fit for me. I really enjoy having a large say in what the cover will look like, down to how I market the book. There are so many great self-publishing sites out there, that my book will have the distribution that it needs and is going to be an e-book as well as a paperback! One of the great perks about self-publishing, is that I can price my book so that everyone can enjoy it. Sometimes, it is just hard to find twenty bucks to put toward a book. Also, the market is shifting more to e-books, and while there is still a huge market for physical books, I realized how much of the author's commission was taken by the publisher.

So, I have hired me an amazing editor, Jessica, (owner of Mystic Manuscripts), to edit my manuscript. Jessica also is doing my cover! She is so talented and very reasonably priced.

Wow! I can't believe it is really happening. So excited!  Thanks for coming on the journey with me!