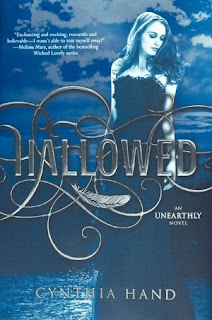 by Cynthia Hand (Goodreads Author)
Goodreads:
For months Clara Gardner trained to face the fire from her visions, but she wasn't prepared for the choice she had to make that day. And in the aftermath, she discovered that nothing about being part angel is as straightforward as she thought.
Now, torn between her love for Tucker and her complicated feelings about the roles she and Christian seem destined to play in a world that is both dangerous and beautiful, Clara struggles with a shocking revelation: Someone she loves will die in a matter of months. With her future uncertain, the only thing Clara knows for sure is that the fire was just the beginning.
In this compelling sequel to "Unearthly," Cynthia Hand captures the joy of first love, the anguish of loss, and the confusion of becoming who you are.

My Thoughts:
Clara has a lot of hard choices to make this book. I found that Cynthia did a great job with all the emotions. It must have been hard to write. I was in awe of her handle on all the tug-a-war emotions. Lol. I am giving away one of my weakness as a writer *grin* I have to work so hard at this. I devoured the first book in this series, but had a hard time with this one. It was slow.


***Spoiler***
My heart was sad, and by the middle I was like please just let Tucker go already. She obviously belonged with Christian, but first loves are hard to overcome and it being a great guy like Tucker made it even harder. I even felt for the dark wing.
It was a great story of coming of age and having to deal with the pains of leaving first loves and growing up. I enjoyed it, even if it was slow in many spots.