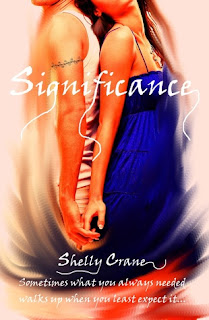 Maggie is a seventeen year old girl who's had a bad year. She was smart and on track but then her mom left, her dad is depressed, she's graduating, barely, and her boyfriend of almost three years dumped her for a college football scholarship. Lately she thinks life is all about hanging on by a thread and is gripping tight with everything she has. Then she meets Caleb. She saves his life and instantly knows there's something about him that's intriguing but she is supposed to be on her way to a date with his cousin. But things change when they touch, sparks ignite. Literally. They imprint with each other and she sees their future life together flash before her eyes. She learns that not only is she his soul mate, and can feel his heartbeat in her chest, but there is a whole other world of people with gifts and abilities that she never knew existed. She herself is experiencing supernatural changes unlike anything she's ever felt before and she needs the touch of his skin to survive. Now, not only has her dad come out of his depression to be a father again, and a pain as well, but Caleb's enemies know he's imprinted and are after Maggie to stop them both from gaining their abilities and take her from him. Can Caleb save her or will they be forced to live without each other after just finding one another?

The cover was the first thing that pulled me to this book. I love a good soul mate book and Shelly knows how to make you sigh for the guy…aka, Caleb, yum! I loved the whole bonding thing and how they can only get their powers if they find their significant…so sweet! The other thing I really appreciated about this romance was that it was clean. Shelly delivered a very sweet and touching romance without the sex or petting. I love to find these kinds of books! Whenever I need a romance fix, I can just pick this book up and by the third chapter have my heart warmed. Plus, the characters were really fun!

Unfortunately, I do have to point out that I was extremely sad that the grammar wasn’t cleaned up. There was even a sentence that looked like half of it was deleted. I don’t know how that happened, but I couldn’t figure out who they were talking about. Also, there is a lot of backstory in the first chapter that slowed down the flow of the story and Maggie’s internal debates felt a little repetitive by the end of the story. Other than that I really did love the story and all the characters.

Normally, I would rate this book a three stars because of the grammar and stuff, but this book really touched my heart, and I couldn't but it down so it gets a four star!