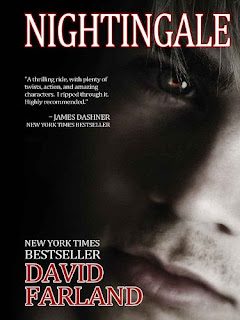 Goodreads:
“We all become lost children at one time or another. When no one else can find us, we must find ourselves.”
– Olivia

Bron Jones was abandoned as a newborn. Thrown into foster care, he is rejected by one family after another, until he meets Olivia, a gifted and devoted high-school teacher who recognizes him for what he really is—what her people call a “nightingale.”
But Bron isn’t ready to learn the truth. There are secrets that have been hidden from mankind for hundreds of thousands of years, secrets that should remain hidden. Some things are too dangerous to know.
Bron’s secret may be the most dangerous of all.

“The world of fantasy has a new king!”
–John Jerrold

My thoughts:
Farland wrapped me into this story by pulling my heartstrings for Bron’s situation. I really wanted to see things get better for him. Also, Farland’s attention to detail really brings his book to life, along with great characters. Bron is a very complex character. I was never really sure what he would do or where his loyalty lied even by the end of the book. Will he hold strong to the good in his life? I hope so. The world Farland painted is very cool. I enjoyed the complexity of the plot and neat abilities of the characters. I really enjoyed this book. The only reason I gave it a four stars, instead of five, was because of my personal preference in books. This is what I would call a “smart boy book.” I like these kinds of books, but they don’t make me sigh at the end of them. Also, from the preface, it gave me a sci-fi feel even though it is fantasy. For some reason, it took me halfway through the book to shake that feeling. Sci-fi isn’t my thing, so I had a harder time getting into this book at the beginning, but I kept reading and was glad I did! Farland’s writing is great. If this book sounds up your alley, you will not be disappointed in Farland’s ability to draw you in and captivate you until the end!
Notes: I rate this a PG-13.
Posted by Unknown at 10:44 AM